While Bakuon is very much about motorcycles and the culture surrounding that, it can also easily be viewed as a commentary on hobbies in general, as the conversations that arise are ones we’re all familiar with, and likely have had ourselves.

You will find a social hierarchy and snobbish elitists in almost every circle of any hobby. And looking at it that way elevates it beyond being a ‘fun cute girls do motorcycles’ show to one that we can all laugh along with for its “truth” in that it presents a sincere portrayal of the different sorts of hobbyist people and discussions that overlap across virtually all hobbies. Different forms of bonding, appreciation, bragging, elitism, passion, love, dislike, understanding, and knowledge are present.

Making the blissfully ignorant newbie, Hane, the protagonist was the best bet in bringing out the most potential of the show’s core premise, as well as being the most fitting way to bring in viewers and get them to care about this dumb and dangerous hobby. It’s made into a joke how much there is not to like about motorcycles through the characters (mostly Onsa) failing to think of reasons why they’re so great. And I think it’s something all of us can relate to; having a difficult time explaining one’s opinions on why something is so awesome and/or special, but not being able to come up with anything so you fall back on the ‘gut feeling’ and ask the other person to just trust you know what’s good. 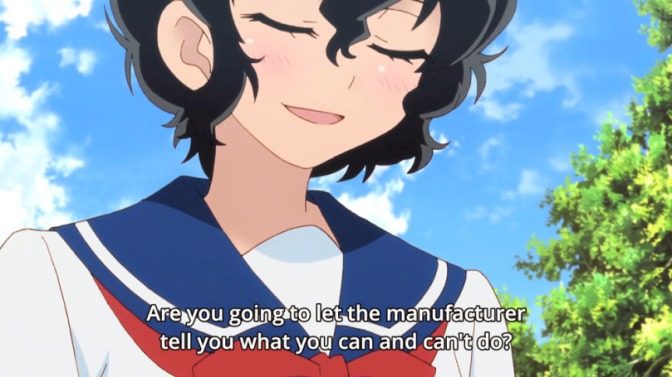 It’s through Hane that we are shown some pretty simplistic appeals that almost anyone can understand and/or relate to. She doesn’t know much about motorcycles but she finds her own reasons to like them and makes it into something special to her because of it. And when you hear her really heartwarming speech in episode 9 it really speaks to the sincerity of the values we assign to our hobbies and the reasons in which we use to describe our love and appreciation of them.

Whether you care about motorcycles or not, I think this show speaks to anyone who has a hobby they’re madly involved with, and can get behind the idea of watching something that depicts their experiences with a lot of heart and veracity. Showing you parallels between yourself and the characters’ experiences; the time you became fascinated and taken in by the hobby, those times you couldn’t properly explain what you loved so much about the hobby and just spoke candidly with great warmth and enthusiasm (and other times intensity), the clashes of opinion over the little things that make up the hobby, and the times where you are able to just hang out with friends and enjoy the hobby together, regardless of any feuds or differences. Despite (or rather because) the show is constantly criticizing itself and highlighting the downsides of the hobby, the sincerity behind it all is powerful enough to burn through that and cover it in smoke.

Hobbies are more than just activities. They’re doorways into another form of communication and engagement; they’re communities. And it is the participation between the two that makes the pros seem so good and the cons not so bad. It’s impossible for me not to make the comparison to my own anime and blogging about anime hobbies. I don’t do it professionally (yet) and it can be frustrating at times – arguments that leave both parties at odds over something that may seem trivial, but this too is part of our hobbies, and a way of voicing different forms of appreciation. 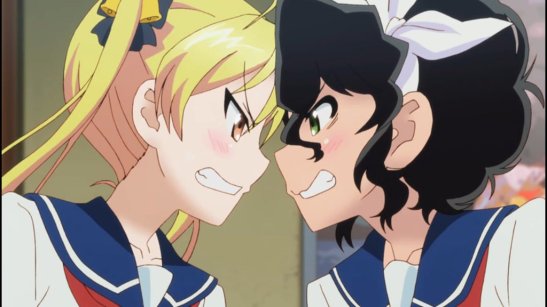 Drawbacks are present in every hobby, and sometimes it can be hard to explain the appeal of our own and why we participate in them (so much). But a good answer, and one of my favourites, is the act of participating in and of itself. The sharing and discussing with other fans. To give back something for being given such treasurable experiences is more than rewarding enough to put up with the not so good parts that come with these hobbies of ours.

We interpret meaning, make up our own reasons for enjoyment, voice our criticisms and/or complaints, and appreciations all because we love what we do, and can’t imagine giving it up. Bakuon understands this and packages it all together with great candor and love of both the good and bad parts of our hobbies accompanied by hilarious commentary and lots of fun.

On understanding anime and each other [->]

A Criticism of Critical Approaches [->]

Behind Anime and Manga Appreciation [->]