I don’t know what compelled me to finally dig up the grounds of anime legacy and unearth this series, apart from perhaps a give-in to my long felt build up of guilt for having not watched such a classic. But I’m glad I did, because it was, despite some of its arguably dated aspects, an engrossing watch. Berserk is, I feel, a rarity, in that it doesn’t play around and try to bullshit the viewer. No, it treats you as it treats Guts. Like. A. Fucking. Adult.

This show has more balls than 97% of all the shows I’ve seen and it will shove those balls into your face and give zero fucks as to what you’re comfortable with (not in a juvenile way like my hyperbole though). I have an immense respect for the series, because it doesn’t talk down to its audience, but shows us respect and maturity in a way that most shows don’t.

We see this man cloaked in black and firing arrows with pinpoint accuracy at some despicable scum, followed by a swing of his big fuck-off sword which stands taller and heavier than him. And you immediately get a sense of what kind of guy he is and what he’s been through to have adopted such merciless behaviour.

Then you see him uncloaked in battle against a demon, far stronger and more powerful than him and you witness his vulnerability; his scars of how he came to be what he is now, naked to us. And just when you think he’s outmatched, he demonstrates wit and sheer guts in using a frickin’ canon as replacement for half of his arm to win and survive another day in this dark and unforgiving world.

What an incredible opening episode.

One of the things that immediately stood out to me in this version of Berserk was the directing. It’s bloody brilliant, harsh and grim. And within it lies a rather raw presentation of human nature and survival. The gorgeous environments are mostly portrayed in darkness or with lots of shadows, cracked and in ruins but still maintaining a quality of beauty to them, in parallel to Guts’ damaged self.

Events prior to the present day we are shown in the first episode depict a younger Guts placed in environments with a lot more colour and life to them – from luscious fields of green to castles and other landscapes that give this sense of exoticism. By comparison, though we are given a much shorter glimpse of him, the older version of Guts stands scarred and broken, like the now desolate ruins of these same environments, devoid of their peaceful atmosphere and replaced with an air of fear and dread. The world feels consumed by a greater evil than that of human malice and greed. 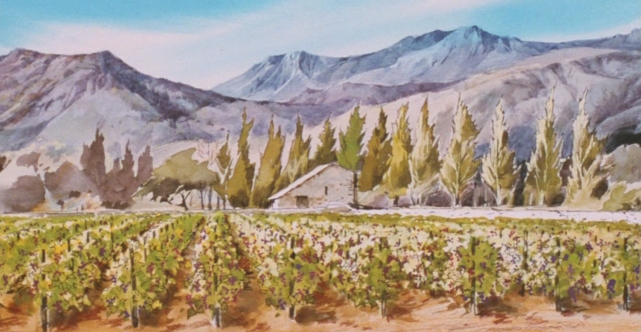 Just as Guts is changed by his time with the Band of Hawk and the many perils and adversities he faces over the years, so too is the world in which he resides, mirroring these changes in a very literal sense. Where victorious battles were met with cheers, smiles, and celebrations from his brethren under bright blue skies, is now replaced with a lot more doom and gloom, implying a cold indifference of the world which has now turned dark and frightened. The setting forebodes this sense of decay and desolation right out the gate, and we can only watch in wary anticipation for the reckoning that is soon to follow. 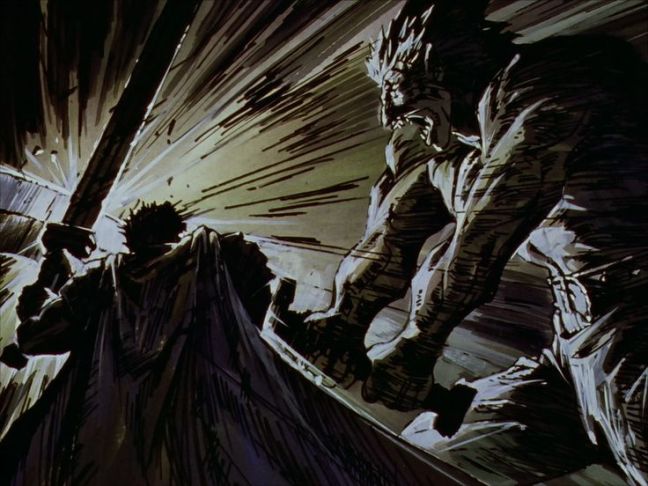 Perhaps not as striking and masterful as Dark Souls, the environments in Berserk tell a story. The imagery perfectly communicates a transience of time that has gone from a fairly peaceful age with signs of hope for a better tomorrow appearing in the calm moments, shining weather, and bright smiles, to one fraught with danger and full of bleak and maddening monstrosities. We are left to speculate how things become this way until it is revealed to us at the very end.

The contrast and execution of this type of visual storytelling here, emphasizes the impact of every scene – the gentle and kind moments of friendship, peace, belonging, and unity vs. the cruel and unforgiving scenes of a cold and stark reality that lies in wait. Our foresight of the dark times to come is what makes this such a powerful connection, because we want to prolong our stay in the (relatively) peaceful past where there is still some kind of hope and kindness left in the world, and the environments remain (mostly) untainted by evil. There is a want to delay ourselves of returning to the horrifying present we were first given a most unkind glimpse into. 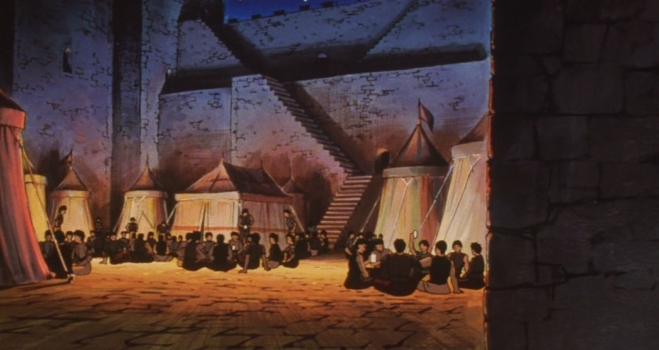 Berserk is both an ascension to heaven and a descent into hell – a story of rising to the top only to fall once the goal is within reach, and from the first episode we are aware of this fact. On your first viewing you may not know how the world turns into such a wicked dystopian nightmare, but you are shown enough to form an idea. You are given a glimpse of the horrifying present that has yet to come, as we are thrown back to before when the world was comparably far less hellish. And the imagery from the landscapes and environments is enough to communicate this information.

You don’t need the characters or plot to convey this, because it’s already inferred and easily understood by the viewer within the first two episodes. It draws on the natural curiosity of the viewer by painting this picture of a particularly striking stop along the journey we are about to see Guts embark on. And that’s what makes the imagery here so attractive, because it tugs at our desire to continue watching to see how this story unfolds and how the character of Guts comes to be as he is, scarred, battered, pissed off, and intent on revenge. 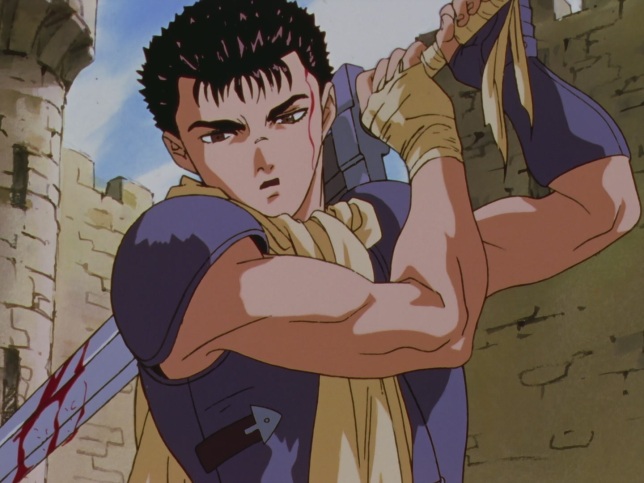 It’s a well-known fact that Berserk is really fucking bloody, brutal, and violent. And I’d argue it holds up in a lot of ways (and as a testament to some), just as it appears dated in a few others. Recycled animations and lots of still frame, barely animated movements stand-out, not in too awkward or that bad a way though. Rather I think these are endearing qualities of the show. Berserk holds up in large part thanks to the creative liberty taken to make quite a few of these low budget limitations into something transcendental – with some scenes striking in their imagery as stylized paintings come alive.

The dated look and feel does come across particularly noticeable and distracting in some scenes, but for the most part does little to detract from the overall experience. Depending on who you are, the at times clunky feel may actually add to the experience here. If it weren’t for the excellent and memorable characters I doubt it would be as celebrated a classic that it is. With Guts being the iconic mainstay image of masculinity and Griffith being the notable prettyboy figure of intrigue going down in history as one of the most interesting and nuanced characters in all of anime. The supporting cast helps establish a lot of the human qualities and atmosphere that makes the show feel more believable and real (despite the often mythical fantasy tropes and conventions employed). Though not as present or fleshed-out as I’d have liked, they’re a fun lot and I was surprised how much I cared about them by the end.

And it has one of the biggest narrative shifts I’ve ever seen (in anime or elsewhere). By which I mean the natural progression of events leading up until a certain point makes sense even though everything verges off in this whole other direction where things become a lot more dramatic, WAY darker, and incredibly unnerving right up until the end where the supernatural elements return in a spectacular horrifying dominance over the characters and the narrative.

This story has BALLS to go in this utterly striking and powerful direction, which stands out as an almost different story, or more accurately moved the story to a different genre, and yet perfectly fits in the narrative. You can’t say it came out of nowhere because the ominous opening and ending segments in each episode hinted as much. As well as the appearance of a demon and a foreboding necklace connected to Griffith all point to something grander and more sinister. There are implications and set-ups in place from the get-go for this larger-scale narrative to arise and the execution is truly something not easily forgotten.

Allusions to consequences of actions and questions from characters suggest themes yet to be fully explored in this (already) grimdark world. The relationships between Guts, Griffith, and Casca are constantly being affirmed, but also quietly put in suspect as to how they’ll develop and play out in the end. There is a lot of complexity here and it is one of the most interested love triangles I’ve seen in anime or anywhere else.

Many have complained over the years for this series’ lack of closure, and we were still back during the time of its airing twenty years ago, I’d be inclined to feel the same way (under the conceit I would be the age I am now). However, it has been two decades since then and even going a couple years back when I was getting into the anime community, there was still talk, memes, and a lot of whining about its iconic cliffhanger with no sequel in sight. My sympathy runs thin here, because the manga has always been an option for these people, and instead of turning to the ongoing (arguably) better version of the story, they choose to continue the cycle of dead memes about the series’ “disappointing” conclusion.

After all the epic moments we witnessed: Guts vs Zodd the Immortal; and the first time we see Guts truly gripped by fear, Guts carrying out Griffith’s assassination order; and the time the show cemented just how grimdark it was willing to be (Guts kills an innocent child by accident); Griffith’s conversation with Charlotte and Guts overhearing his attitude towards friends; that sets in motion one of the most (holy shit) satisfying domino chain of events ever, leading to other unforgettable moments such as: Guts leaving the band of Hawk; defeating Griffith in the process (Griffith’s depression), Griffith’s torture (nothing will ever compare to this), and Griffith’s choice near the end. Yet, there is still more emphasis placed on the show stopping at what I’d argue was the best point they could have left the series at, than how awesome of an end it was? The ballsiest of finales to put all other finales to shame! Really?

Fair enough, if you don’t like reading manga. I get that. Not everyone who watches anime reads manga. But if you really, really, really wanted to know the rest of the story then you’d have long since swallowed that pill and just read the damn thing. There’s a lot more dark, good stuff for us to sink our teeth into already, so why should we let pained patience for a decent sequel adaptation stop us?

This wasn’t meant to be an attempt at me validating the quality of Berserk. I don’t feel qualified, nor it necessary for me to do so. And I wasn’t trying to make a case for which version is superior either. I just wanted to highlight some things the series did that I found remarkable or interesting, as a form of appreciation for its wicked love and as celebration for it turning twenty this year.

I’m on tenterhooks for continuing the journey of this amazing story and very much look forward to reading the manga. Happy 20th (anime) Berserk!